The sessions of the Qatar-Kuwait Business Forum reviewed the investment and business climate in the State of Qatar and the State of Kuwait, ways of enhancing joint investments and exchanging industrial and commercial experiences between the two brotherly countries.

The participants pointed out that there are investment opportunities available in both countries that must be used to establish Qatari-Kuwaiti alliances in various fields, explaining the investment mechanism in both the State of Qatar and the State of Kuwait and the facilities granted to businessmen and investors.

The Markets Manager at Qatar Free Zones Authority Fahad Al Kuwari said that the authority supervises three free economic zones, which are ‘Boufantas’, ‘Umm Al Houl’ and ‘Musheireb’, and that these areas provide their services to local and foreign investments, and facilitate procedures in front of investors.

Al Kuwari pointed out that the free zones in Qatar are highly efficient, taking advantage of a wide range of innovative technologies and modern technology, as they possess effective pumping systems that reduce the use of water, and pedestrian, bicycle, public transport buses, rainwater management systems and other modern systems.

For his part, the Assistant of the Commercial Records Registration Department at the Ministry of Commerce and Industry Saleh Al Marri confirmed the existence of a number of incentives enjoyed by the foreign investor, including allocating the lands necessary for the investor to set up his project, in addition to exemption from income tax and customs duties on the semi-manufactured raw materials.

Al Marri presented working paper during the sessions of the Qatar-Kuwait Business Forum on the one window project that began work since last year.

He pointed out that the one window provides more than 150 government services concerned with establishing companies, and that the number of required documents is more than 7 official documents issued to the facility, in addition to the existence of 22 electronic systems for government agencies.

For his part, the Assistant Director General of Business Development at Kuwait Direct Investment Promotion Authority’s (KDIPA) Muhammad Yousef Yaqoub affirmed that Kuwait had taken many measures that would liberalize the sectors of the economy through legislation of economic laws, pointing out that the measures taken contributed to the progress of the State of Kuwait in the global indicators, the most prominent of which is the Ease of Doing Business Index.

The second session focused on ways to enhance cooperation between Qatar and Kuwait in the industrial sector and its challenges. Participants spoke about industrial finance and the presentation of Kuwait renewable energy projects.

The Head of Business Finance at Qatar Development Bank Esa Al Ansari said that the bank provides many important services to the entrepreneurial sector, through many products and services.

He noted that the bank granted direct loans by about QR 6.7 billion during the year 2019, and granted about 566 customers direct loans.

For his part, the researcher and Shagaya Project Manager for Renewable Energy in Kuwait Ayman Al Qattan said that the importance of renewable energy lies in enhancing the security of electric energy, creating unconventional work opportunities and strengthening local light industries. 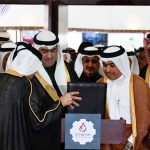