Sponsors of ‘Made in Qatar 2020’ honoured

Qatar Chamber held an honouring ceremony for sponsors and entities that provided support for the ongoing ‘Made in Qatar 2020’ exhibition in Kuwait.
Minister of Commerce and Industry HE Ali bin Ahmed al Kuwari handed over the prizes to the recipients.

Addressing the event, QC Director General Saleh bin Hamad al Sharqi said that holding the ‘Made in Qatar’ exhibition and its business forum coincided with celebrations of Kuwait National Day.

Speaking on the occasion he expressed his deep thanks and appreciation to the Kuwaiti Prime Minister Sheikh Sabah Khalid al Hamad al-Sabah for his kind patronage to the exhibition.

He also conveyed thanks to the Minister of Commerce and Industry HE Ali bin Ahmed al Kuwari and his Kuwaiti counterpart Khalid Nasser al Roudhan for opening the exhibition, as well as Qatar’s ambassador to Kuwait HE Bandar bin Mohamed al Attiyah and Kuwait Chamber for facilitating procedures of the expo.

Sharqi hoped that the expo would establish a new phase in the course of commercial and economic relations between both countries’ businessmen and serve as a starting point for more strategic partnerships and direct investments that meet the aspirations of both parties. 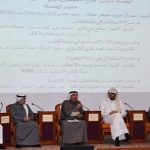 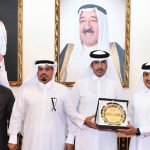