‘Made in Qatar 2020’ Kuwait edition concludes with several trade deals

The ‘Made in Qatar 2020’ Exhibiton which was held at the Kuwait International Fair ended yesterday with several contracts and partnerships signed between Qatari and Kuwaiti companies.

The expo saw the participation of about 220 Qatari manufacturing companies, and witnessed a large turnout from Kuwaiti businessmen and representatives of Kuwaiti companies from various sectors who were interested to meet with their Qatari counterparts and learn about the exhibiting industries.
On the sidelines of the expo, a multitude of agreements and partnerships contracts were signed.

QC Chairman Sheikh Khalifa bin Jassim Al Thani expressed his thanks and appreciation to the State of Kuwait for hosting the exhibition, eluding the kind patronage of the Kuwait Prime Minister.

In a press statement, Sheikh Khalifa said that this patronage demonstrated the strong relations between both countries, and praised the success of the expo in promoting Qatari industry in Kuwait, noting that this success would pave the way for more cooperation between Qatari and Kuwaiti manufacturers.

He added that the exhibition saw many agreements, MoUs and partnerships formed, and reiterated that these accomplishments promise more cooperation between Qatari and Kuwaiti businessmen for the advantage of both countries’ economies.

He also thanked the Kuwait Chamber for holding the event and for hosting the business forum, which reviewed enhancing commercial cooperation between both parties.

For his part, QDB Business Manager Khalid Al Mana said the bank’s participation in the expo comes as part of its strategy which provides opportunities for the SMEs to promote their products outside Qatar, noting that Qatar managed to establish an industrial boom at all sectors, especially in food security.

Al Mana noted that Qatari products are of high quality, which enabled them to reach world markets, pointing to the role of QDB in enhancing entrepreneurship and opening new markets for SMEs with a view to increasing non-oil exports.

Speaking about his third time to participate during the ‘Made in Qatar’ expo, Frico Factory Sales Manager Hosam Al Sayed noted that the factory was a Qatar-Kuwaiti investment specialised in air conditioners.

He praised the large turnout of Kuwaiti businessmen and investors who were eager to learn more about the Qatari industry.

The ‘Made in Qatar’ exhibition aims to support national industries and products, highlight the progress and successes achieved by the Qatari industry over the past few years, support the state’s efforts aiming to support the industry sector, as well as  open up new foreign markets to Qatari companies and enhance relations between Qatar and Kuwait. 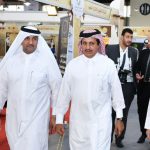