Al Raya Newspaper is Media Sponsor for ‘Made in Qatar 2020’

The Gulf Company for Printing and Publishing (Al Raya Newspaper) will be the Media Sponsor for the upcoming ‘Made in Qatar 2020’ exhibition.

Commenting on the agreement signing, Saleh Al Sharqi expressed the Chamber’s thanks to Al Raya Newspaper for the media sponsorship to the expo.

He eluded the newspaper’s key role in highlighting issues relevant to the Qatari private sector and covering the Chamber’s news, events and activities.

On his part, Abdulla Al Muhannadi said that Al Raya Newspaper, as the leading media outlet in Qatar, spared no efforts in showcasing the exhibition and offering support for Qatari companies which reflected the development of the national industry sector.

Al Muhannadi paid tribute to the Chamber’s significant role in representing and supporting the private sector and promoting Qatar as a leading destination for investment in the region.

He presented the first printed issue of the newspaper to Al Sharqi who eluded the newspaper’s role in enriching the Arab media arena and the impressive success it accomplished during its march thanks to professional performance and credibility.

The expo, scheduled to be held between 19 – 22 February 2020, will be organised by the Qatar Chamber in cooperation with the Ministry of Energy and Industry,  Qatar Development Bank as strategic partner and in coordination with the Kuwait Chamber of Commerce & Industry on an area of 10,000 sqm. at the Kuwait International Fair in Kuwait.

The third edition of ‘Made in Qatar’ to be held outside Qatar is expected to see participation of over 220 companies and factories from Qatar. 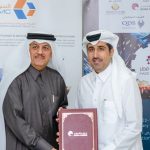 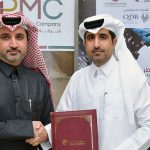