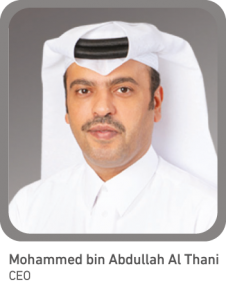 commercial bank, with an ownership structure split between the Qatar Investment Authority (50%) and the remaining (50%) held by members of the public.

QNB Group’s presence through its subsidiaries and associate companies extends to more than 31 countries across three continents providing a comprehensive range of advanced products and services. The total number of employees is more than 29,000 serving 25 million customers operating through 1,100 locations, with an ATM network of 4,300 machines.

QNB Group has maintained its position as one of the highest rated regional banks from leading credit rating agencies including Standard & Poor’s (A), Moody’s (Aa3), Fitch (A+), and Capital Intelligence (AA-). The Bank has also been the recipient of many awards from leading international specialised financial publications.

Based on the Group’s consistent strong financial performance and its expanding international presence, QNB is currently ranked as the most valuable bank brand in the Middle East and Africa, according to Brand Finance Magazine.